Counting Down to Disneyland Paris' 25th Anniversary 3: My Dreams Story 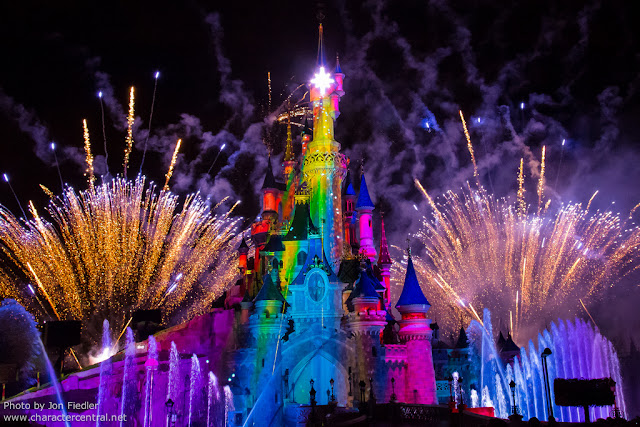 With just over a month to go until the Disneyland Paris 25th anniversary, I thought I would tell you all my Disney Dreams story.

I first saw Disney Dreams in October 2015, after watching it a few times on YouTube and not really being all that impressed with it. We wanted to catch it in the Summer when Lee and I went for the first time, but, upon learning that it wouldn't start until 11, we decided to just leave the park. In October, it was on at a far more reasonable time of I think it was 8pm, so we decided to stick around for it. I really wasn't expecting to enjoy it, as I didn't love it on YouTube, unlike Magic on Parade, which I fell in love at first sight with, so when I started getting emotional at the Tangled scene, I was shocked. The show really was so much better in person than on YouTube, the projections just looked amazing in real life. I left the park teary and emotional, but full of happiness.

Fast forward to April 2016, which was the first time that I was staying at the park for more than one day. I decided I had to watch Dreams on both of my days in the park, having now seen it on loads and loads of Disney vlogs. Both nights I was there in April I watched Dreams all by myself, so I just stood and wept at the aforementioned Tangled scene, and also now the Peter Pan music, which was a new experience for me again. I had now become that much of a Dreams fangirl that I got emotional numerous times watching it.

Then, at Halloween 2016, I watched it another three times, each time loving it more than the last, and each time falling even more head over heels for it. I now found myself singing along with the show, even the French bits, and I knew that this could potentially be the last time I ever saw the show, so I spent the last night just taking it all in. I went in December last year for a day too, but Dreams was replaced for the Christmas Season by Disney Dreams of Christmas, which, sadly, I did not enjoy (other than a bit of Nutcracker music), so I was never to see Dreams again.

I am, of course, excited for Disney Illuminations, but, because I have had such a whirlwind love affair with Disney Dreams, I will be sad to see it go, sad to see the whole Peter Pan theme go, and sad that I will no longer hear that the second star to the right shines in the night for me. I guess I will just have to be extremely grateful for YouTube (and now, DisneyLife) for always being there to fulfil my Dreams cravings. I am actually going to watch it right now.