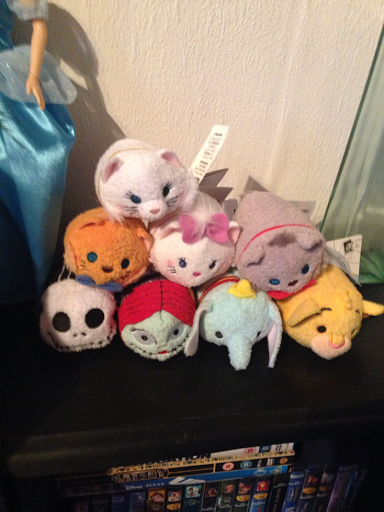 I was tagged by my amazing friend Rachel (who I am going to DLP with, see the trip announcement video here) to do the Tsum Tsum tag. It will be incredibly quick, as I am by no means the biggest Tsum Tsum collector, but I thought I would give it a go anyway.

1. How many Tsum Tsums have you got?
I have a grand total of nine Tsum Tsums. Yes, nine. The eight pictured above, and a medium Marie.

2. Which Tsum Tsum was the first in your collection?
The little Marie was the first one I bought, from Clinton's. It remains my favourite one.

3. Do you have any full sets?
No, I am very picky about my Tsum Tsums.

4. Which is your favourite set?
Well, since I don't have any, none of mine ha. I suppose I would have to say The Aristocats set that came out last month; I would've bought all of them had I had the money.

5. Who is your most wanted Tsum Tsum?
This is a tough one seeing as I don't look at them all that often. I suppose Nala, because I have Simba and Nala was my favourite when I was a kid.

6. What set would you like them to release?
Oliver and Company maybe. Or 101 Dalmatians. Yes, Dalmatians, I need a Perdita one so much.

7. Do you collect just Disney, or do you also collect Marvel and Star Wars tsums?
Here is where my pickiness comes into play. I will not collect either Marvel or Star Wars tsums as I do not like the 'people' tsums, I only really actually like the animal tsums.

8. Do you have any of the non-Disney Store Tsums?
Why, yes I do. My little Marie, Dumbo and Simba tsums are all from Clinton's.

9. Do you dislike any of the Tsum Tsums?
As I stated earlier, I really don't like the people tsums. I don't think they look good, so that's why I only get animal ones. (NB. Jack and Sally were a gift, I know they count as people tsums)

10. Who do you think they should have released with previous sets?
I'm really not sure with this one, I think the sets have previously been very good at including all the major characters.

I tag Tsum Tsum queen Victoria to do this. Also anyone else who wishes to join in.