Let’s Have A Catch Up 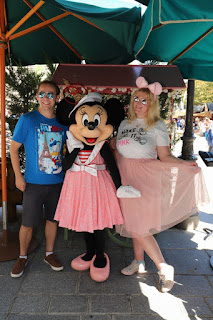 Hey everyone, long time no speak eh? I’ve been trying to think now for the longest time about when to finally post again, as it feels like an absolute age since I posted anything, and then I looked back to see when I last posted; and it has been. With that in mind, I thought I’d give y’all a little update on what I’ve been up to since I got back from Florida. So, grab a cuppa and let’s have a catch up...

So after I got back from the sunshine state, I had the worst PDD (post Disney depression) ever, and it didn’t help that I had my first experience with jet lag. It’s fair to say that I spent a fair few days moping about in my pyjamas. That being said, I tried my best to participate in Camp NaNoWriMo. A couple of weeks later, I started my new job. It was totally different to anything I’d done before, so blogging and writing really took a back seat, as starting at a screen all day after almost 3 months of being out of work was really taking it out of me. But I’m now on 4 day weeks so I’m in a routine, I think, so my creativity has slowly started resurfacing.

Anyway, on to the recreational stuff I’ve been up to; I spent a lovely August bank holiday weekend down South with Sam’s family, and I also went to the Artbox Cafe (more on that very soon), I went to Disneyland Paris again, I reluctantly went to Warhammer World, me and Sam got cinema cards, I had a lot of roast dinners, and I went axe throwing!

I’m now more ready than ever to throw myself back into writing, which includes this lil space here, so expect more over here again, hooray!