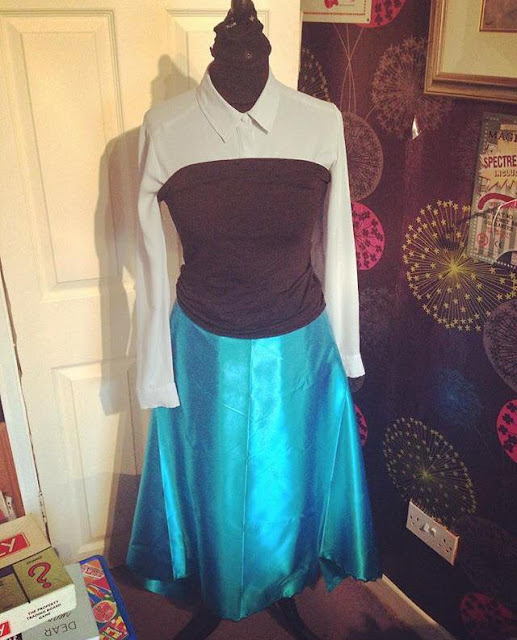 As you may know if you follow my cosplay page, I am planning on making twelve cosplays this year. I know, a mammoth task, right? So I decided to showcase one a month on here for you all to see. Some will appear ahead of various conventions that I am planning on going to, some after. This one is obviously appearing before, as I haven't been to a convention yet this year. I thought I would do back to back posts of how I made the cosplay, and then the day after the cosplay being worn by me. Sound good? So the first cosplay in this little series is my Ariel 'Kiss the Girl' dress, which I was actually planning on wearing last year but never got round to it. This picture is a little tradition I have on Instagram, where I post my cosplays in their various stages. Anyway, I'm babbling now, on to my Ariel costume.

So the costume started with the blouse, which I didn't actually make. It is a Primark blouse that has a big old ink stain on the front, but I thought, rather than throwing it away, I'd use it for a couple of cosplays. I don't wear corsets at the minute, so the black part is recycled from my Briar Rose cosplay (which was the first cosplay I ever did) which just slips on over the top of the blouse to create a corset effect. The skirt I made using one of my normal skirts as a template. I just pinned my normal skirt on to the material, and just cut around one side of it. I then used the cut out side as a template for the other piece, and then sewed the sides together. It's called a half circle skirt I think, but don't quote me on that. I bought the wig from eBay, which I will show you in tomorrow's post of the cosplay in action.

I hope you enjoyed the first instalment in this series, and I'll see you next month for part two.