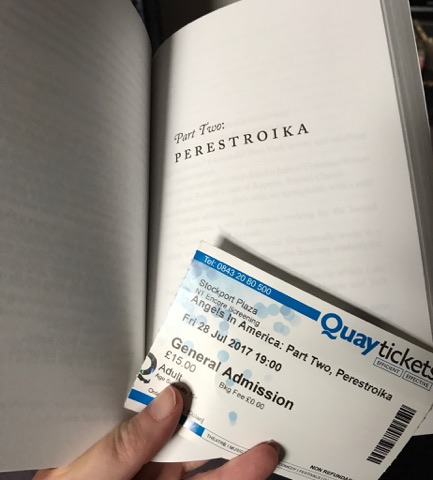 So last week I reviewed Angels in America part one, which you can read here, and now I'm back to review part two, which I saw at the Plaza last week.

Now, if you think I enjoyed part one, then boy are you going to think I'm a mad fan girl when I tell you how much I enjoyed part two. The subheading of the play, a gay fantasia on national themes, really comes to light in Perestroika, with the appearance of angels, the talk of prophets, and a scene which literally takes place in heaven. The themes of this play are spectacularly well written and performed, with the allegories being perfectly shown to me. The sheer tragedy of the AIDS epidemic is shown in full in this part of the play, and the concluding speech had me flat out in tears,

Once again I need to talk about the acting. I know I go on about Andrew Garfield a lot (which you will definitely know if you follow me on Twitter) but his performance as Prior Walter is truly mesmerising. All of the actors really made me feel for the characters, and I left the play an emotional wreck. Honestly some of the best acting I've ever seen, from theatre, tv or film. Once again I must make my plea for you all to find an encore screening of this eight hour masterpiece and go see it, you won't regret it.